Digital advertising spending is expected to surpass $1 billion for this first time in an election cycle in 2016. Where is the money coming from, where is it going, and how did we get here?

To understand digital in 2016, you have to go all the way back to 2004, when Yahoo! was still a behemoth and Facebook (FB) was still “Facemash,” a sort of “Hot or Not” for Harvard students. It was Howard Dean’s 2004 presidential campaign that set in motion a digital revolution in political campaigning and fundraising. The former Vermont governor was the first to harness the power of the internet to bring in campaign donations, organize gatherings and get out the word via the blogosphere.

Barack Obama’s camp mastered these techniques in subsequent cycles — and that meant real money. Like Dean, he raised enormous sums online, $500 million in 2008 and $690 million in 2012. Obama spent about 10% of his campaign war chest on digital in 2008 to best Republican nominee John McCain, pouring millions of dollars into advertising through established platforms like Alphabet‘s (GOOGL) Google (then just known as “Google”) and Yahoo! as well as then-up-and-coming social site Facebook. In 2012, he upped spend to 15%, dedicating 10 times more dollars to digital efforts than challenger Mitt Romney and setting the bar high for digital campaigning. Deep dive: How 2016 is the real “Facebook election”

This year, things are set to change again, if not by the efforts of a single candidate then by the combined forces of campaigns across the country. Digital ad spend is expected to catapult to more than $1 billion in 2016, according to advertising tracking firm Borrell Associates, marking a huge jump from the roughly $160 million spent in 2012. Deep dive:Senate races will dominate spending 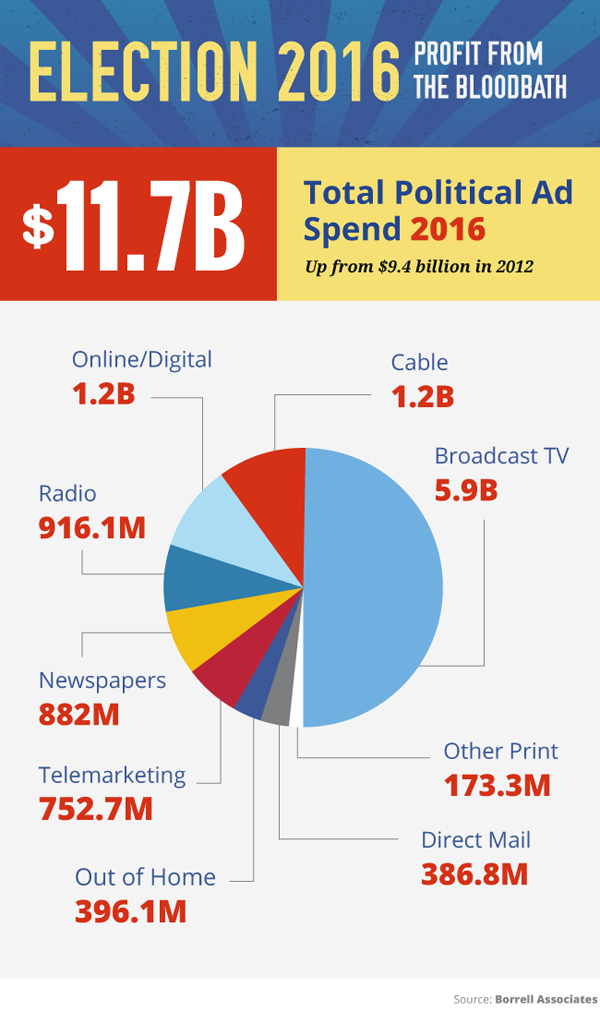 “What the more adventurous campaigns have realized is that mass media and mass communications as a mover in politics is on its way out,” said Kip Cassino, executive vice president at Borrell Associates. It is no longer enough, especially with millennials, to broadcast a message widely on the assumption that some portion of constituents will react to it — digital offers an unprecedented ability to hone and target messages in order to persuade voters and motivate them to vote.

While many firms will share in the bounty, it’s the usual suspects of Google and Facebook that will take the lion’s share. Here’s how it will break down.

So, how do we get to $1 billion? First, campaigns started with digital early.

Federal Election Commission (FEC) data show Bernie Sanders’ and Hillary Clinton’s campaigns tapping Blue State Digital, the consultancy behind Obama’s 2008 and 2012 efforts, as early as last summer, and the Clinton camp has already paid more than $9 million to Bully Pulpit Interactive, another digital firm that worked on Obama’s re-election campaign as well as with the Democratic National Committee and the DCCC, an organization dedicated to electing Democrats to the House of Representatives.

And while presumptive Republican presidential nominee Donald Trump has largely eschewed data, many others in the GOP have embraced all things digital, and chances are he will have to do at least some spending on it, too. He has already spent more than $130,000 on Facebook placed media and about $3,000 on Twitter (TWTR) , as well as contracting digital consultants like Virginia-based Rick Reed Media. Deep dive: 2016 will be a make-or-break year for Twitter

Social media has exploded in recent years. According to data from online statistics portal Statista, the number of monthly active Facebook users worldwide has grown to more than 1.6 billion from just over one billion during election 2012. on Twitter, monthly active users have reached 310 million from 185 million. Snapchat, which was barely on the radar in 2012, today has an estimated 200 million monthly active users, 150 million of them daily. They and others have become increasingly important to advertisers, political and otherwise, in turn.

Twitter is angling to stand out from the pack as an opportunity for political marketers to capitalize on discussions, hashtags and momentum already on its platform surrounding live events through promoted tweets, promoted trends and video. Though it is likely to capture some ad dollars, it won’t grab the bulk. “Twitter is making moves, but hasn’t quite figured out the paid side as effectively as its competitors,” said Sarah Newhall, executive vice president of strategy and insights at Blue State Digital.

Instead, it is Facebook that is likely to see the biggest ad budgets this election cycle. As Vincent Harris, Republican digital strategist and CEO of Austin-based communications firm Harris Media, put it, “it’s like all of those Facebook emojis were made for the Trump campaign.” One analyst has pegged political ad spending on Facebook in 2016 at $350 million. The social network offers political marketers numerous options to help campaigns and committees build supporter bases, match their voter files and persuade and turn out voters. Strategists say the data it gives them on ads are also extremely useful.

Snapchat is also in the mix this cycle. The app is rising in prominence for native advertising and video, promising access to highly-coveted millennial voters through ads as well as different views, filters and formats. Unlike other platforms where ads compete for space with other items on a screen, Snapchat gives advertisers all the real estate. Strategists are betting on its power even though this is its first election cycle.

“It’s really a medium that can be extremely valuable to [candidates] in this election cycle,” said Joe Lavan, vice president of data and insights at online behavioral targeting software developer Netmining.

The Power of Targeting Voters

Another big chunk of spending on the way to $1 billion is targeted, programmatic advertising.

Marketers are targeting voters through inventory provided by a wide variety of platforms, including Alphabet‘s YouTube, Facebook, Instagram and Pandora  (P) . Say a campaign thinks it needs to make sure women ages 25-to-34 in eastern Iowa get out to vote; with a few keystrokes and a little budget, it can tap various platforms where those voters are to make the appeal through banner ads, video or other media. Deep dive: How Pandora is a candidate’s secret weapon

In previous cycles, campaigns would go direct to sites like Verizon-owned (VZ) Huffington Post or 21st Century Fox‘s (FOXA) Fox News for branding buys and homepage takeovers in hopes of reaching the right constituents. Today, things are different. Programmatic advertising works by collecting anonymized customer data to create a digital profile and using that to target relevant ads across platforms. Campaigns use ad networks, like Google’s DoubleClick to buy ads across websites that attract the right users.

“If you are a politician and you’ve got a problem in a certain district or a certain state, being able to gin up some ads and get them in there at literally the click of a button is a politician’s dream,” said Cassino.

Borrell Associates estimates programmatic advertising will account for at least 30% of digital ad spend this election cycle, though others have set the bar higher. Some of that spend overlaps with social, which allows this kind of targeting.

Improvements in programmatic advertising will drive its expanded role this election cycle, said Newhall. “One of the biggest benefits of programmatic advertising is fast decision-making married with the efficiencies of scale, both assets that campaigns rely upon during the heat of the campaign season,” she said, meaning that campaigns can quickly deploy targeted ads to many users with agility and ease.

A number of entities stand to benefit from this programmatic shift. Facebook, given the wealth of data it has on single consumers, is likely to be a force to reckon with, as is Google via products like DoubleClick. Verizon’s AOL may get a piece of the pie on the programmatic side, as well less obvious players like TubeMogul (TUBE) , an independent software platform for brand advertising. News outlets like Huffington Post, Fox News andTime Warner’s (TWX) CNN also stand to see programmatic ad dollars thanks to a willingness to shift to a more audience-driven approach.

“They have also responded as the advertising landscape has changed to basically open themselves up not only to the traditional direct buys that they have done in the past and continue to do, they’ve really also opened their pipes to programmatic ad buying as well,” said Lavan.

The last piece of the $1 billion is local advertising and more “traditional” digital methods, like search and email.

Candidates often seek to mirror their television buys on the digital end by placing ads on specific sites, explained Andrea Duggan, vice president of media sales at Cox Media Group‘s Gamut, a media services company that sells ad space across various digital properties. “They want to create some frequency or to create some different reach and really follow that news and information consumer throughout their day,” she said.

As a result, campaigns and consultants tap local partners like Advance Digital, which owns a slew of local media properties like AL.com, cleveland.com and PennLive, to advertise as well as properties operated by companies like Tribune Publishing (TPUB) , which owns the Sun Sentinel in South Florida (print and digital), among others, and Gannett (GCI) , which owns The Des Moines Register and Cincinatti.com, among others.

More traditional digital advertising techniques will also get a piece of the billion-dollar pie, such as paid search, which Borrell Associates says could account for more than $350 million of spend on platforms like Google and Microsoft‘s  (MSFT)  Bing through paid search results and purchased keywords, and email, which will make up an estimated $127 million.

“We are in an age where campaigns realize that if they’re not advertising online and spending significant resources that it’s going to impact their bottom line vote,” said Harris, the Republican digital strategist at Harris Media.

And here there is a gap between Republicans and Democrats. Harris, who has managed digital strategy for presidential campaigns for Rand Paul, Rick Perry and Newt Gingrich, estimates that most GOP camps won’t spend more than 5%-to-10% of ad budget on digital advertising, while the Sanders campaign appears to be devoting a third of its ad budget to the digital space. However, that is gradually changing. “If you look at how this is trending, it’s trending in the right direction,” he said.

To be sure, not everyone is quite as bullish as Borrell in its $1 billion digital ad spend estimate for 2016. Wells Fargo analyst Marci Ryvicker has pegged the number at $800 million, noting that it is possible to have a presence on Facebook without actually spending any money. Just look at Trump, who has gotten an estimated $372.6 million of free media on just Twitter through May, according to analytics firm mediaQuant. But not everyone has Trump’s online clout, and there are many campaigns this year that will spend big to get it.